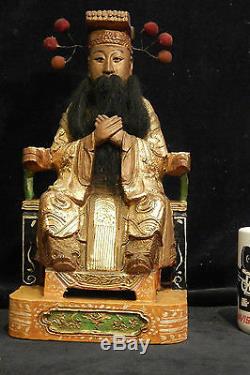 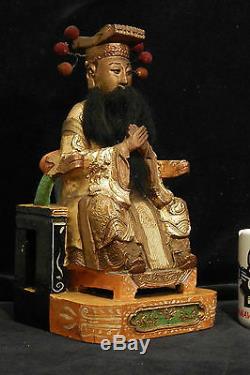 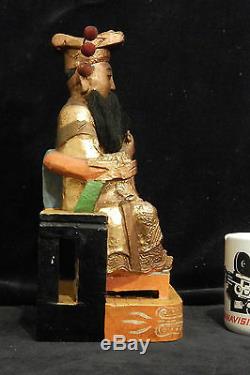 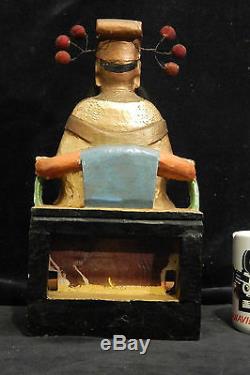 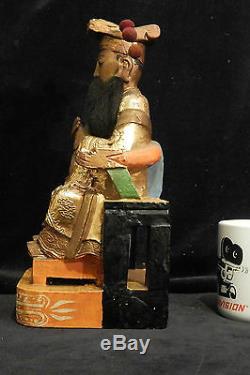 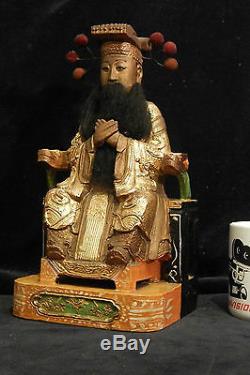 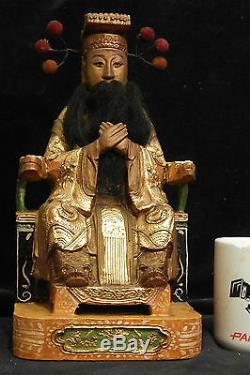 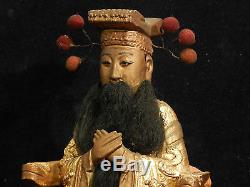 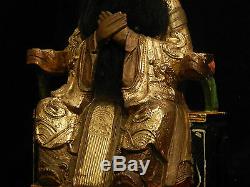 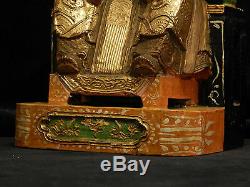 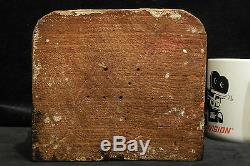 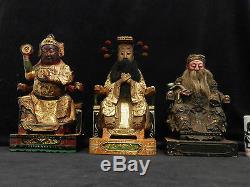 Base Depth 5.5 inches (14 cm). (Yu Ti, Yu Di, Jade Emperor, Jade August One) The Jade Emperor, supreme ruler of Heaven, was an important figure in Daoism and popular Chinese mythology. He determined everything in Heaven and earth and commanded hundreds of gods and spirits to carry out his orders. The Jade Emperor is a comparatively late figure in Chinese mythology. An expression of Daoist philosophical notions of the universe, he came to be personified as an all-powerful god. He was celebrated by the Song dynasty and gained greatly in popularity after Emperor Hui Zong (11011126) gave him the title of Shang Di, the highest god. This is an antique hand carved wood gold gilt figurine of the Jade Emperor, he is sitting on a dragon throne with a stylized dragon head at each arm, the throne is handpainted. The dragon filigree on his robes is unique, and the pattern specific to him. He has full features with beard and mustache in place and in excellent condition. His over all condition is excellent with all his pom poms in place, only minor rubbing here and there. He has an incense patina and has obviously been venerated.

He is hard carved from a single block of dense hard wood and weighs 3.5 lbs. Every aspect of the figure has been addressed whither it is in view or not. This Taoist statue is part of our large collection gathered over a lifetime of collecting. This immortal statue we believe is Qing Dynasty and dates late 1800s. These hand carved statues are each an individual creations, they are not cast, all the detail and workmanship is by hand and they are very rare.

The iconography is traditional and it is executed with a high level of accomplishment. This large statue stands 12 tall and is 6 ½ wide and 5 ½ deep typically found in Taoist temples.

Please see all the photos for the composition and condition of this rare antique Taoist deity. If you have a special request we will do our best to adjust the schedule to accommodate your schedule.

· It is my intention to be as clear and accurate as possible. In the event I make an error, I will always do my best to remedy the situation. · Please feel free to contact me with any questions. · Coffee cup is for scale purposes only.

Myths and legends about Yu Huang developed to fill in details; they told of his beginnings as the son of an earthly king and made many references to other Daoist beliefs. It was said that before he was born, his mother dreamed that Lao-tzu, the founder of Daoism, handed her a child; soon after, according to myth, Yu Huang was born. When he was still young, his father died.

Yu Huang became king, but he had been interested in studying Daoism and allowed someone else to rule in his place so he could continue learning the Dao. He lived in the mountains and attained perfection there. He devoted the rest of his life to helping the sick and the poor learn about Daoism.

He became an Immortal; after one million years, he attained the highest calling as the Jade Emperor. Yu Huangs wife was said to be the Queen Mother of the West, Xi Wang Mu, who lived in the jade palace in Kunlun.

Yu Huangs own palace, located in the highest level of Heaven, was guarded by Qing Long Pa Jiang Jun, the Green Dragon General. Yu Huangs chief assistant was Dongyue Dadi, who was in charge of a spiritual organization that was similar to Chinas earthly system of government (see Ministries of Gods). Like the earthly officials, the gods and spiritual officials could be fired and assigned to lesser posts if their work was not up to the high standards of the Jade Emperor during his annual inspections. Artists portrayed Yu Huang with a crown of gold and strings of pearls, holding a jade fan or tablet, and dressed in ceremonial robes embroidered with the pictures of dragons.

The item "Large Rare Important Temple Jade Emperor Yu Huang Dadi Taoist Handcarved gilt" is in sale since Sunday, April 19, 2015. This item is in the category "Antiques\Asian Antiques\China\Figurines & Statues". The seller is "toronita1" and is located in Port Orange, Florida.